Whether you’re at a networking event, a party, a conference, or an office function, walking up to a stranger and introducing yourself can be terrifying.

And while you might be strategic about your in-person opening lines, it’s important to apply the same level of thought to your online communications — especially with your sales emails.

Check out what sentences to avoid to get more responses and make a great first impression.

This opening is a big no-no — especially when you’re reaching out for the first time. This sends a clear message to the recipient that you’re only looking after your own interests. And in sales, you’re supposed to solve problems for your prospect, not the other way around. 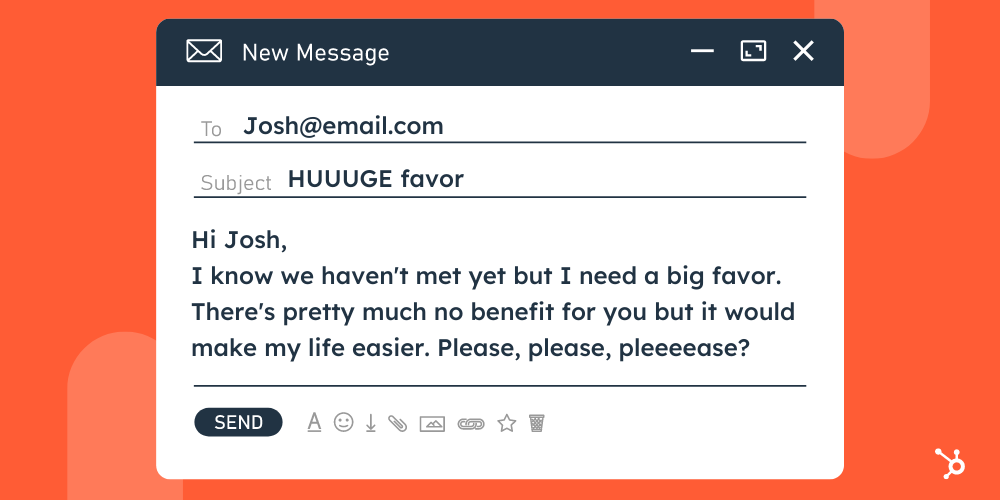 Instead, try a different angle. For example, take a genuine curiosity in the prospect and ask a thoughtful question, or briefly explain the problem you’re hoping to solve with their assistance. You could say something along the lines of, “I’m reaching out about…”

Although this is a professional salutation, it’s also impersonal and cold. On top of that, it can send the wrong message.

For example, the prospect might assume that you didn’t bother to research their name — and if you didn’t research that, you probably didn’t do homework on their company, either. And who wants to work with a rep who knows nothing about them?

In 2022, email personalization is key. In fact, it’s no longer a nice-to-have, but a necessity. 71% of consumers expect companies to offer personalized communication.

A trigger event — a relevant, recent occurrence that creates an opening for a sales opportunity — is a fantastic reason to contact a prospect and offer your help, with a catch.

Starting your email with a vague or generic “Congratulations” is a huge misstep, according to Anand Sanwal, CEO of CB Insights. 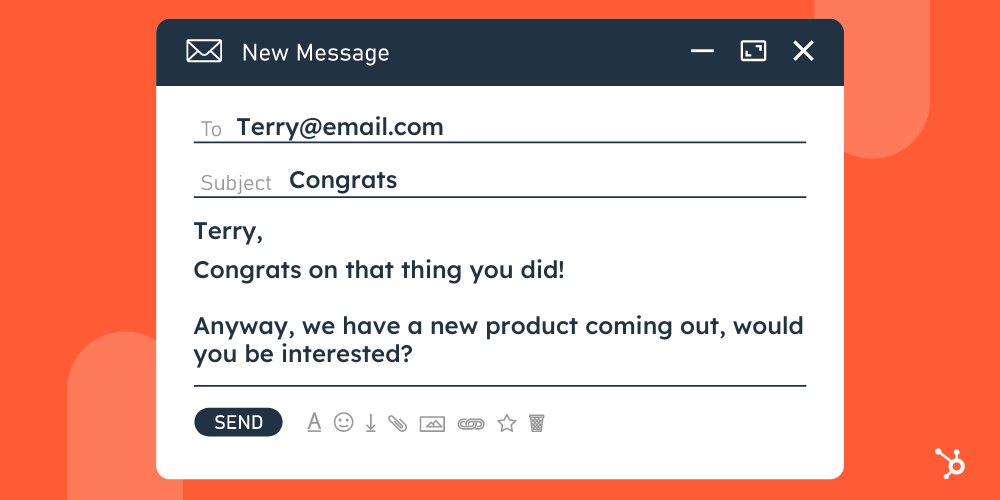 “This is a hollow, lazy opening,” he says. “While I like being congratulated on things as much as the next guy or gal, this screams ‘form letter.’”

To make it clear you’re not spraying and praying, get specific — really specific — with your congratulations.

For example, instead of “Congratulations on getting funded,” you could write, “Just read that you raised $1.5 million in Series A — congratulations! Your plans for growth sound exciting, especially an expansion into the Midwest market.”

Bonus: That gives you the perfect segue into your next line: “Usually, when companies move into new territories, they need to get boots on the ground as soon as possible…”

It’s always important to respect your prospect’s time. That said, buffering your emails with “I know your busy…” or, “Sorry to bother you…” implies that your email isn’t important or much of a priority.

If you believe in your product’s value, and you’ve done some basic homework to ensure your prospect is a potential fit, then you’re not wasting their time. You’re helping them. 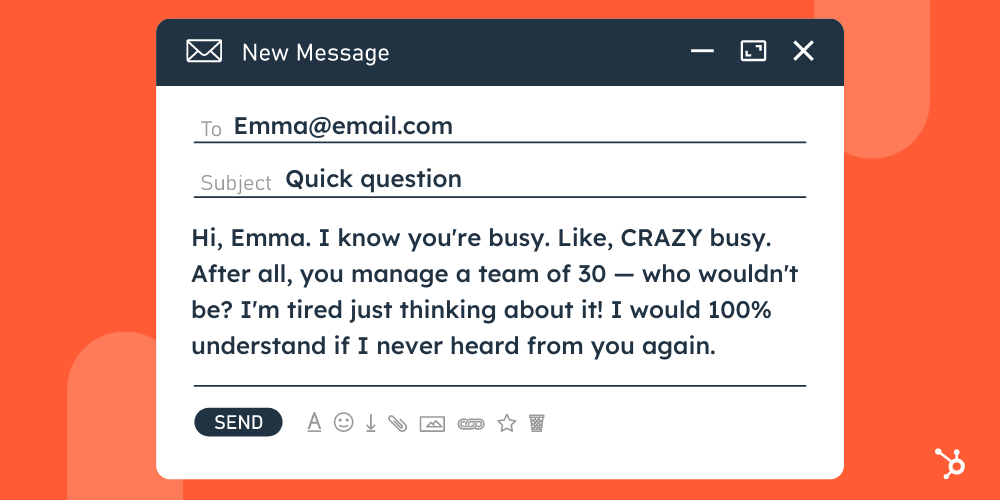 Some reps attempt to create urgency by starting their emails with a rhetorical question, such as, “Did you know most U.S. workers have an average of 199 unread emails in their inbox?” (Yup, that’s a true stat.)

I have bad news for anyone who believes prospects will read this line and think, “No, I did not know that. Wow, I better drop everything and work with this salesperson!”

The typical reaction is usually closer to: “Ugh, if I wanted cheesy selling, I’d go watch an infomercial. Delete.” 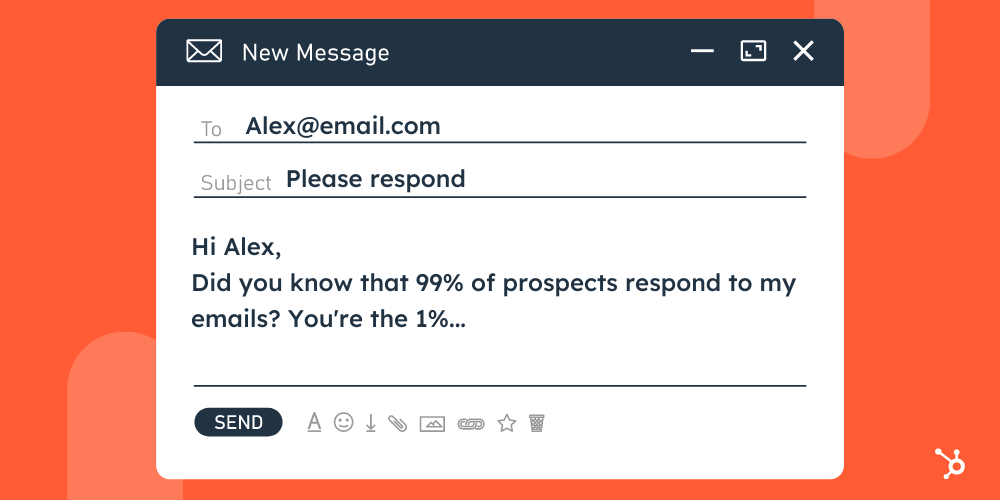 You can definitely use intriguing stats to instill a sense of urgency, but dropping them out of the blue won’t get you a response. If you’re going to start with a stat, make sure that you personalize it to the prospect’s unique situation and weave it into your email naturally, like so:

Names are one of the hardest things to remember — because, let’s be honest, people aren’t that interested in them. That means starting emails with, “My name is Aja Frost, and I’m an account executive for Zone,” will send my recipients straight to snoozeville.

Plus, it’s easy for prospects to figure out your name if they want to. All they have to do is look at the “From” field or email signature.

Luckily, fixing this mistake is easy: Just cut this sentence from your message so it now begins with the second sentence. Your recipient will appreciate how quickly you get to the point.

This isn’t to suggest that small talk is inherently bad. Instead, it’s a reminder to strike a balance between being friendly and getting to the point.

Dive right into your message. If you need to add details, they should come later. Not only will you save precious space, but you’ll also have a far better shot of catching your prospect’s attention. 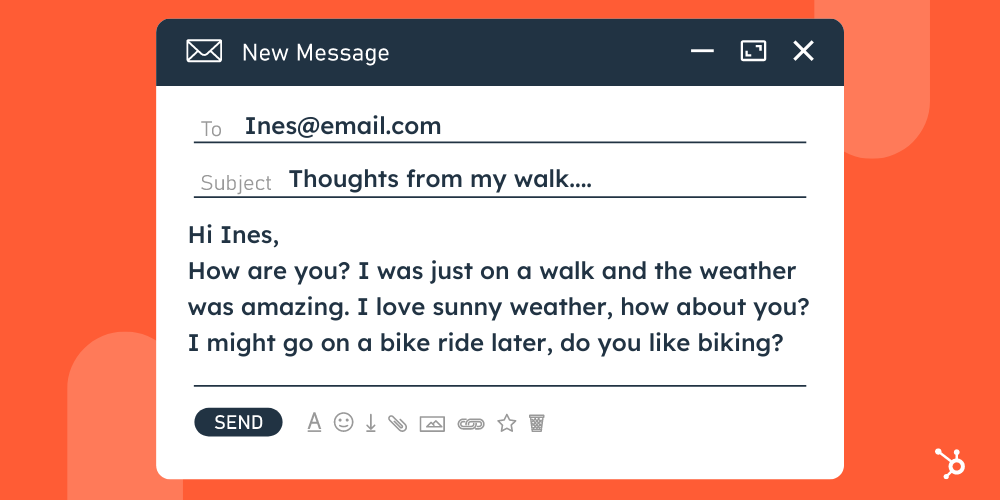 Your closest friends care about what you’ve been thinking. Your prospects? Not so much. So rather than starting off with “I’ve been thinking” — and immediately coming across as self-interested — simply invert the statement.

Okay: “I’ve been thinking about your recent acquisition of Darby Apparel, and…”

Better: “Your acquisition of Darby Apparel on Friday got me thinking…”

The second approach feels much less self-serving, simply because it starts by referencing the prospect (“Your”) rather than the rep (“I’ve”).

In fact, you should never begin an email by talking about yourself — sales emails should be about prospects. If you find yourself saying “I,” use this inversion trick.

Now the focus is firmly on the prospect.

Launching into your message with “I work for so-and-so” is even worse than starting with your name. Not only is it boring and unoriginal, but it’s like planting a huge sign in the prospect’s brain that says, “I’m trying to sell you something!!!”

Telling the prospect which organization you represent can be useful; for instance, if the company is well-known, or if you’ve met the buyer before and this detail will help jog their memory. However, you’ll want to weave your company’s name in naturally.

Dale Harding recommended we get in touch. I work with Dale on HubSpot’s sales products team.

That’s actually why I wanted to reach out — he mentioned you were adding some reps to your team, and I thought our CRM might be a great fit for you. It’s 100% free and really easy to use.

How do you normally handle onboarding a large group of reps at one time? I might be able to share some pointers.

This HubSpot mention feels natural because the recipient knows an employee who works there — so if your prospect has a connection to a coworker, feel free to drop your company’s name.

You can also swap out “we” for “the [company] team;” for instance, “In the past year, the HubSpot team has partnered with…”

Oh, and if you’re sending along content from your company? Just insert the name into the description like so: “I’m linking to a HubSpot blog post on CRMs you may find helpful…”

Sales reps sometimes use this line to follow up with inbound leads who downloaded a piece of content, watched a video, or visited a site page.

The good thing about this line is that it’s timely. You’re reaching the buyer right at the moment they’d like to be contacted by Sales.

The bad thing about this line is that it’s vague and confusing. What does “find what you’re looking for” mean, anyway?

Get specific so your buyer knows exactly which opportunity or pain point you’re referring to.

Here are some sample lines:

The more granular you get, the easier it will be to kick off a productive conversation.

Forging a good first impression with a new prospect can be tricky — but with these openers out of the way, you’ll have a better shot. Sometimes, what you don’t say matters as much as what you do.